Shark Tank has formally hit its stride. As I noted in my latest Fast Company post (number 6 below), “Even though Friday night is typically TV’s death slot, ABC’s Shark Tank has managed to draw a big audience, and an affluent one, boasting the fourth-highest median income among viewers of any series on the major networks this season.”

For those new to Shark Tank or those already hooked, here’s a two-part negotiation by a “mini-Shark” that is worth its weight in gold (plus an amazing example of salesmanship, passion and commitment):

My 6 Posts on Shark Tank:
Let the Feeding Frenzy Begin

Looking at the last 12 months, I noticed in retrospect that of all the posts I wrote for Fast Company during this time, 2 of my Fast Company posts were about the hit ABC TV show.

Why stop there? I also wrote 4 more posts for this blog you’re reading right now (which is why you should subscribe if you haven’t already, so you don’t miss any good stuff. Top right of the page: Fill it in, and you’re all set.).

I decided to put the list (and the links) of all 6 posts here so you could easily access them and get your Shark Tank fix for any you missed.

#1. The Shark Tank
Formula: 4 Steps To Owning
A Room — And Making A Killing

Besides introducing the “action figures” of the Shark Tank, this Fast Company post covered the 4 “lethal traits” it takes to be a Shark. By the way, I designed and conceived of these Shark Tank action figures.

In case you missed the action figures, here they are again:

#2. For Those Who Wanted Even
More of Those Action Figures

Some just couldn’t get enough of the action figures so I showed them here MUCH bigger because, sometimes, size does matter.

Shown above is Daymond. To see the whole bunch, click here.

#3. Daymond and Kevin Blow my Mind:
Sharks and Love and Coming Out
Of the Shark Tank Alive

Then I saw that Kevin O’Leary tweeted “I got a good laugh from this…” as well. Made my week (or more likely, my month).

The whole story can be found here.

I then tweeted Daymond the above tag line and we agreed I’d do a post with some “Daymond-isms” — insights from the Shark with soul such as:

“One of the most important things for any brand is a strong attention to detail. It shows that you care enough about your work to make it as close to perfect as possible. If a brand doesn’t care to look over its product to make sure it’s the best product possible, there’s no reason consumers should become advocates or brand champions for it. And without brand champions telling everyone how much they love your product, you will have to spend a lot more marketing dollars.”

The full collection of sound bites can be found in this post.

#5. The New Shark Season is Upon Us

After all that happened, I approached Daymond in September about featuring some inside sneak peeks at the upcoming season, since Barbara Corcoran was now sharing the stage with Lori Greiner. 4 exclusive photos with commentaries were featured here (it is like having a backstage pass to the off-camera activities between takes in the Tank).

#6. Business Trends “Shark Tank”
Investors are Biting On in 2013

The last in this series was my Fast Company post with a look forward toward 2013, with comments from the Sharks themselves and what trends and shifts they see. 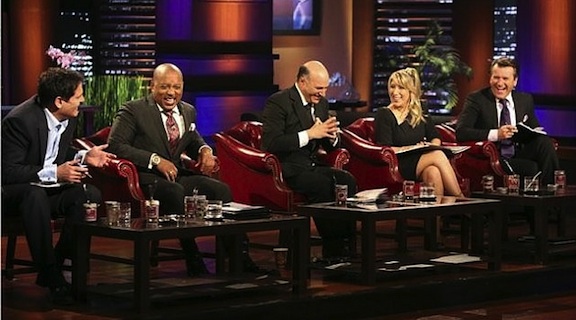 So there you have it. Like I said, there’s quite a bit of material there, and should satusfy the most hungry of you who love the show.

Need more Shark material? Then get yourself a copy of this. You can download it and be reading it in 5 minutes and definitely “get your Shark on.”