The Ebook That Goes Head-to-head with James Bond

In the 50-year franchise, the 23rd James Bond film Skyfall has become the highest grossing Bond film for the multi-billion-dollar franchise. This is the exact catalyst that brought this face-off between Daniel Craig and me to a head. (For the record, that’s Daniel Craig on the left and yours truly on the right…)

I’ll Have My Ebook Shaken, Not Stirred

Once I saw that the new James Bond movie was being called the best Bond movie ever and was clearly in the zone, leaving audiences satisfied and hungry for more, I had to do something. I was not going to take this lying down. This is my video response Daniel Craig, aka James Bond:

You’re Not Blind. I’ll Show You.

A few years ago, I wrote and designed Defying Gravity and Rising Above the Noise, a hardcover, full-color book on branding like no other. It unveiled the 8 principles to achieving and maintaining brand elevation. For any business. But instead of using more words to amplify the points I’d already written (this is the usual approach authors take), I decided I’d show how these principles  are used with the results of the principles.

After all, we’re in the “scan generation” of readers. People scan the written word and lose interest after 140 characters. It’s where our culture is at today trying to wrestle with the barrage of information coming at them at every angle.

James Bond has demonstrated the same thing: Why talk when you can simply show what you mean? So far, so good.

How passionate did people get over this unique approach? Well, I’ll practice what I preach and show you.

OK. By now, you likely want your own copy. So did everybody else.

There was only one stumbling block. Since the book was produced digitally to order (yup, each one was printed to order in its oversized 11-inch tall by 13-inch wide format), the price tag scared some people away. It was over $120 per book. Many bought it and once they received their book, they loved it, and saw its immediate value and used what they read.

But for others, they couldn’t cross that line.

So when I saw the popularity of the new James Bond movie, breathing new life into the longest running movie franchise, I decided it was time to make my book, Defying Gravity and Rising Above the Noise, available to the masses. To the tens of millions of iPad owners in the world. I was not going to let James be the only one to bring something special to the table this Fall.

A Page-turner For Those

Branding should always arrive at a happy ending, no matter now many bumps you hit on your way to your goal. How many scrapes, bruises, near-death experiences does James go through before he finally wins the day?

Well I like winning too. And I like business owners who like winning. Now you can. I am proud to announce you can download your very own eBook of Defying Gravity and Rising Above the Noise for a mere $13.99. About the cost of 3 cappuccinos. 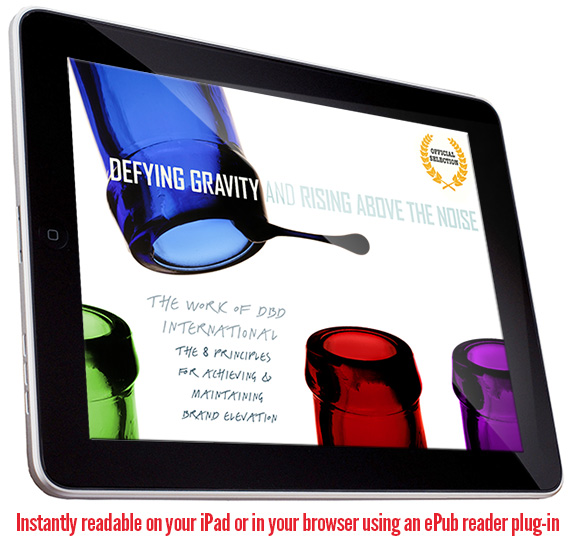 In fact, Stu Sjouwerman of KnowBe4.com, had this to say about the book:

“An excellent overview of and insight into the essentials of branding, illustrated with enlightening and gorgeous examples. David has been instrumental in branding two of my companies, one of which was sold for tens of millions of dollars.”

The 8 Principles to Achieving and

So James, you’re not the only one to bring people to their feet this season. Businesses deserve every weapon they can get their hands on to win the battle for more business, to bring about good through solid growth while destroying the evil of shrinking market share.

James, I see your game. I see what’s going on. And my eBook is my response. While you’re talking about Skyfall, I’m talking about defying gravity.

And with this new tool and digital edition of the book, every business owner, every marketing exec, every CEO and every innovator can kick some branding butt the way you kick the butt of evil.

Thanks for the inspiration.

How Good Design is Like Underwear: It Supports Without Constricting
The #1 Problem in Retail Branding
The One Product Apple Won't Unveil at This Week's WWDC
Does Your Brand Resemble a Frightened Turtle?