As a brand, I find Shark Tank at the top of its game. It’s a well choreographed enterprise that hasn’t lost its mission, focus or appeal.

That’s why I first wrote “The Shark Tank Formula: 4 Steps To Owning A Room–And Making A Killing” in my Fast Company blog which Daymond John tweeted, “the best article ever written on Shark Tank.” Then I wrote another post focused on Daymond who adds more soul to the show than all the other Sharks combined.

And this season promises to be no different in keeping audiences glued to their TV sets.

Compare Shark Tank to Mr. Trump’s “Celebrity Apprentice” which has gotten lost in its own whirlpool of excess. Early on, the show seemed to be more about aspirations: seeing how wealthy celebrities strategized, outsmarted and won in competitive challenges and circumstances. Instead, it’s become less about seeing ingenuity and more about seeing emotional breakdowns, unprofessionalism, total back-stabbing and dysfunctionality. Sorry Donald.

But the Shark Tank, simply put, rocks. And fans love the show.

A Daymond is Forever

This past weekend, I caught up with Daymond to get some inside skinny on what we can expect in the upcoming season of Shark Tank starting this Friday.

He told me some hot news that would, if I divulged those details, likely result in my having to go into witness protection (maybe a slight exaggeration). But there are things I can tell you.

But first, some pictures Daymond shared with me: 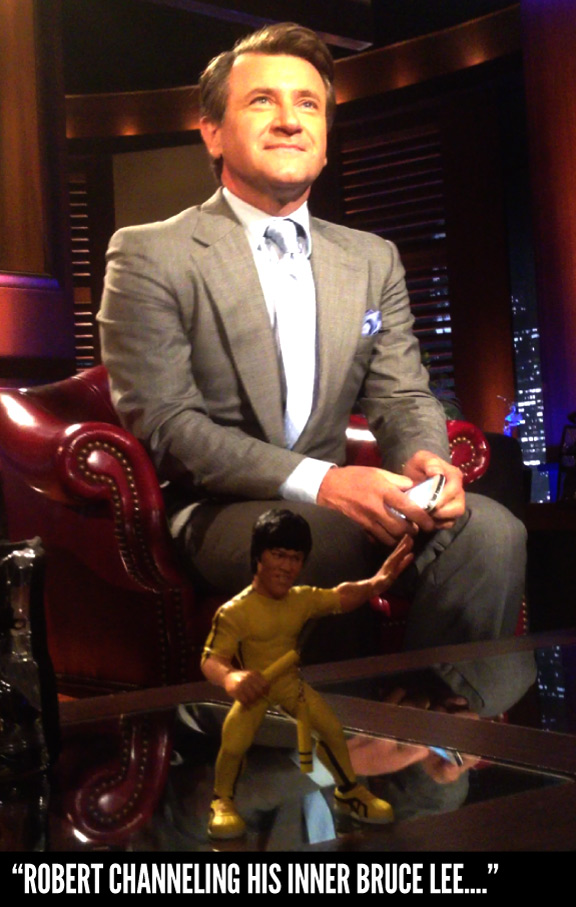 In Daymond’s Own Words

What can viewers and fans look forward to this coming season?

“This season, we have an amazing number of celebrities pitching the Sharks.That’s a new facet that has its own unique dynamic.

“Contestants also now consider they know the Sharks (even though we don’t know them) so they’re always working an angle and figuring out new ways to try to push our buttons and ‘wag the dog.’

“Since this isn’t our first rodeo with each other, we’ve each done deals with other sharks (or have gotten screwed by sharks in the past) so viewers will likely see a little disdain we have for each other growing even deeper than in the past.”

I asked Daymond if there were any surprises or unexpected twists in the upcoming season.

Any products, concepts or negotiating tactics you didn’t see coming? Any surprises you can hint at?

“The Sharks are now starting to get into deals to drive the price up. Then all of a sudden, they drop out just to make the other Shark pay more than they needed. That part stings with more bite than a ravenous wasp.”

What trends do you see in pitches being made this season?

“There’s a growing trend of knowing the show, knowing the Sharks and still being too greedy with a valuation. That alone is suicide a certainly a deal breaker. When they’re that naive, they then turn around and regret not getting a deal, like the Sharks ‘didn’t get it.’ “

What is the common trait to the presentations that are weak and fall flat?

“Over-valuating their company and not knowing their numbers. Another major misstep is telling us your personal problems (like theirs are unique and we don’t have our own).”

Lori Greiner of QVC fame has filled Barbara Corcoran’s stilletos. There are also new trends that could entirely change certain industries. I asked Daymond about these points.

How has the dynamic changed with QVC Queen Lori Greiner stepping in for Barbara Corcoran?

“I personally lock horns with her a bit more but no other dynamic change. It’s pretty simple: We’re are all out for ourselves. Plus I have tunnel vision (probably some ‘night vision’ too giving me an added advantage).”

Any deals you made that you’re super-pumped over?

“A very controversial deal I did and partnered up with Kevin O’Leary of all people! Not certain what’s more crazy — the business concept or the idea of working with Kevin!”

Lastly, any “game-changing” concepts that will blow fans away?

“A deal that is in the fitness space. It will be a definite new trend. Two of the Sharks go to battle over it, but only one comes out the winner….”

The Last Word on Shark Season

As far as a brand goes, Shark Tank has all of the ingredients for a powerful sustainable brand. And if these insider notes from Daymond don’t pique your interest, check your pulse.

Why Did 7 Athletes Create a Video Entitled BEAT THIS?
The Branding Mistake Even Smart People Make
[Video] At the MoMA, Grabbed up Faster than Face-value Hamilton Tickets
In 2 Minutes and 33 Seconds, This Video Reveals What No Design Firm Will Ever Share With Its Clients