Shark Tank is a hit. It’s where we see Marc Cuban, Daymond John, Kevin O’Leary, Barbara Corcoran and Robert Herjavec assess, evaluate, admire or cringe over new business opportunities. They are TV’s five wealthy investors with checkbooks as big as their personalities.

For my latest Fast Company post, I documented (from the viewpoint of branding) their secrets to dominating (and winning) whatever they choose. It’s aptly entitled The Shark Tank Formula: 4 Steps To Owning A Room — And Making A Killing.

In that post, I also isolated the one key attribute that made the difference between a business person who arrives and conquers versus one who merely dreams. This very much aligns to the post I wrote on ordinary versus extraordinary brands.

Bigger Than Life Itself

To add some sizzle to this story, I had created my own fantasy of Action Figures for these five moguls of capitalism. These action figures were not done for the Shark Tank TV show itself or its producers nor any of the Sharks themselves. These were done for my own entertainment and the enjoyment of my Fast Company followers and the Rising Above The Noise blog. But due to the length of the post and available space, the full size Shark Tank Action Figures weren’t shown in that post, which is why this post exists: to take these bigger-than-life personalities and show their action figures in full glory.

As I did in the beginning of this article, I present them here in the order they appear from left to right on the TV show for your viewing pleasure. 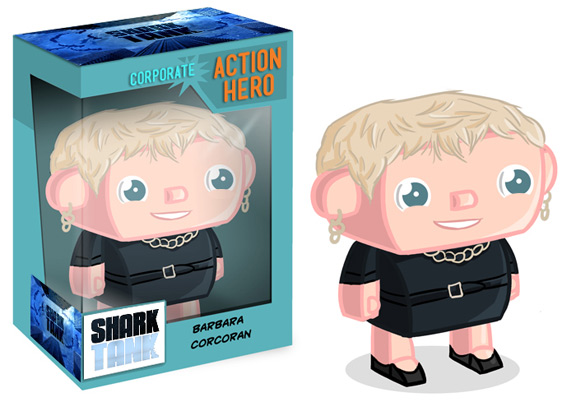 As a fan of the hit TV show Shark Tank, I hope you enjoy viewing these action figures as much as we did creating them.

I invite you to retweet this to your business colleagues. As everyone knows, anyone in business these days could use an unexpected reason to chuckle and who knows who may become the next Shark?

With YouTube Closing Down, Who Will Win Its 8-Year Competition?
How to Brand Low Hanging Fruit: The Tommy John Story
How Do You Disrupt an Industry That’s Lost Its Way?
In 2 Minutes and 33 Seconds, This Video Reveals What No Design Firm Will Ever Share With Its Clients

« Albert Einstein (and Other Marketing Geniuses) on Love, Giants and the Single Brand
Sharks and Love (Or How To Come Out Of The Shark Tank Alive) »