“The luscious aromatic intoxication I held up to my lips warmed my insides like the soft caress of a silk wrap embracing the smooth virgin shoulders of a young starlet at her Hollywood premiere debut….”

Yup, I wrote that. And yes, I am obsessed with an intoxicating shot of espresso where the crema slithers down the inside wall of my cup in slow motion seeming to whisper in a low sultry voice (soft enough so I am the only one to hear), “You come here often?”

Crema? For those not familiar with what crema is exactly, it is the tan-colored foam that forms on top of an espresso shot made up of minuscule air bubbles, forming a “cap” that protects the espresso proper from being exposed to the air.

Just looking at the numbers for American drinkers is interesting enough:

Add to the above these fascinating stats:

But I am not here to talk about the numbers but the experience. And the passion.

The Steamy Side of Branding

Some like it hot while others love it cool. To some, it’s sex. To others, it’s foreplay. To many, it’s a way of life that oftentimes borders on a glazed look of one deeply in love.

And yes, I am talking about coffee….

Yes — and branding. Two subjects I get very, very animated about.

And while I find coffee is best served when inspiration is allowed to percolate while letting one’s inhibitions go AWOL, I’ve learned this ability is something that works — in the hands of a seasoned practitioner — equally well in branding.

But not everything is so black and white, as you’ll see below. There are some grey areas.

My Love Affair With Coffee

I’ve had this love affair with coffee for several decades, sometimes in a dark corner of a cafe alongside a complete stranger, sometimes all by myself. But always stirred, never shaken.

During this same period, I’ve had an enduring love affair with type, design, logos and packaging.

So I decided to investigate, “How deep was this connection?”

I have to admit: I’ve been double-dipping. Between coffee and branding, I’ve been playing both sides.

How? Well, the examples below lay my confessions on the table for one and all to see.

It first started with The Coffee Grounds, a local coffee roaster that needed a makeover for its line of coffees.

The Coffee Grounds project was fine and seemed innocent enough. This was followed by the Natural Cooperative Grocer’s Association (NCGA) that needed, as part of a whole rebranding effort, a coffee bag design. 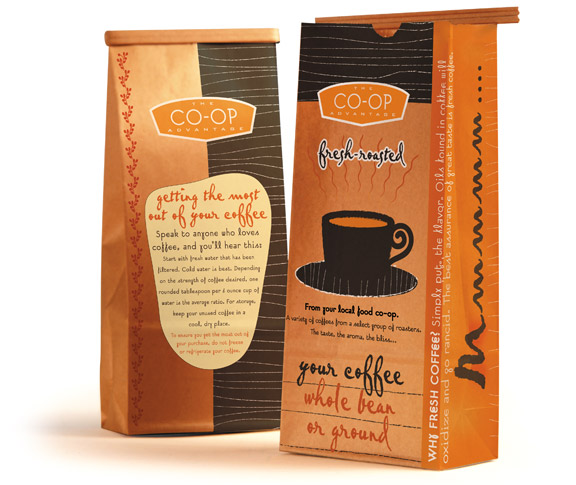 (I Am Starting to Suspect a Pattern)

As I was minding my own business, the Legacy Chocolates rebrand came along. That involved (in addition to packaging their sumptuous chocolate truffles, their coffee beans and their cold-pressed coffee elixirs) the obligatory boutique ceramic coffee cup. People still collect these and love the vintage look and design aesthetic. 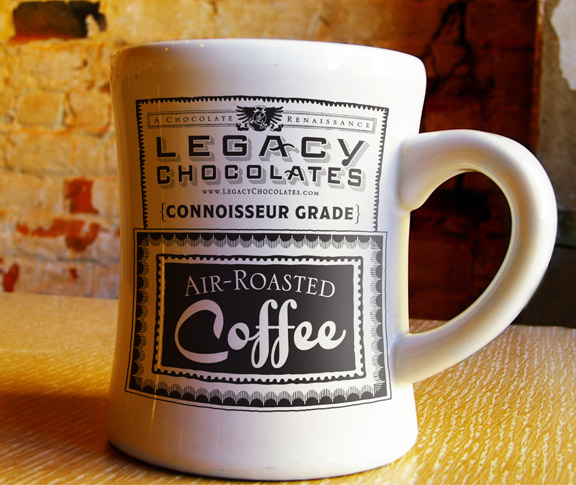 Turning the Volume Up on My Coffee Fixation

Before the next occurrence, I was toying with the idea for a coffee brand and developed Loud Coffee as a concept which you see here, with some obvious inspiration from the movie Spinal Tap. (Want to buy this? Drop us a line.) 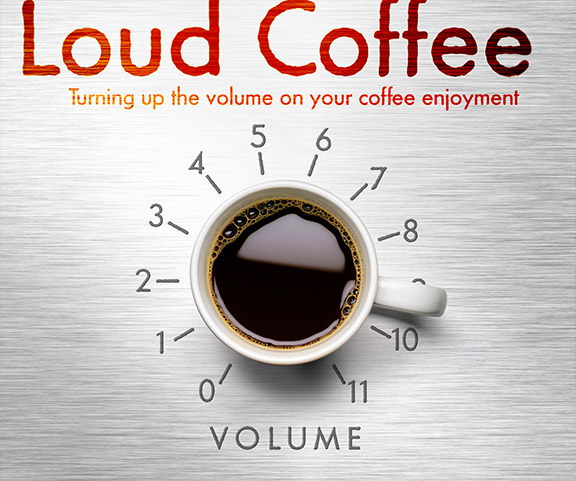 History Is Rewritten (with a Fresh Brew)

This was then followed by a fabulous rebranding of a 118-year-old landmark theater. Part of that included restructuring the entire facility into a cultural center that would interest younger audiences which inevitably resulted in yet another lovely cup design with the new identity shown for the newly developed cafe. You see? It’s not me! It’s circumstance!

Another Tourism Brand Knows When to Pour It On

Then came our rebranding of a city in the Midwest. Part of this rebranding was a series of banners and, lo and behold, one of them was dedicated to “joe.” 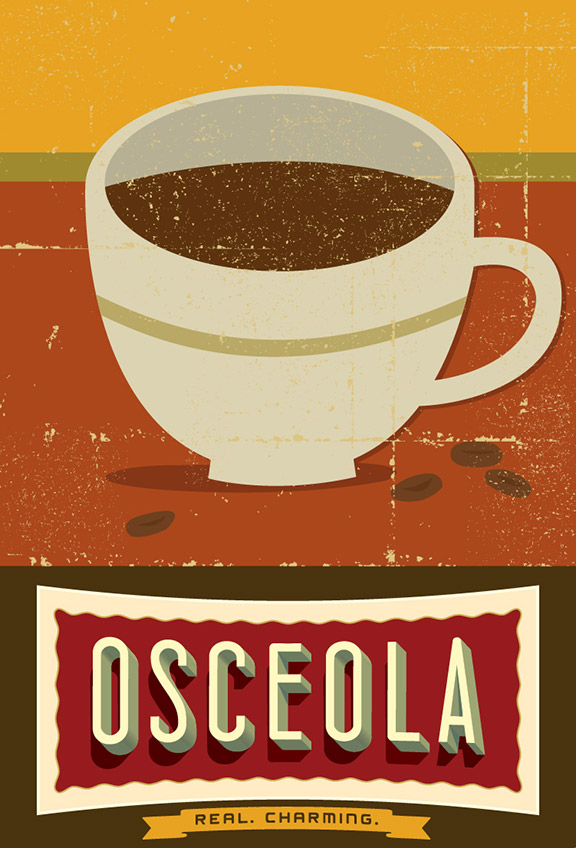 Most recently, while doing some personal art, I designed a coffee poster exploring the tones of black and white art and created this:

Is it Me or is it Getting Hot in Here?

I guess I have to get over the denial and face the facts: I am infatuated with and love both. I also have to face the fact that I am not willing to give up either of them.

Can the three of us happily co-exist? Can we find a balance so one doesn’t feel cheated of quality time?

To answer that, let me just pull a couple of shots, watch the crema slither down the inside of my cup and think it over.

Is Your Brand a Roach Motel? (Brand Failures Explained)
How to End 2015 with a Splash (video): How This Water Brand Did It Right
This Unusual Trigger When Building Your Brand Story
With YouTube Closing Down, Who Will Win Its 8-Year Competition?

« Inside the Shark Tank With Daymond John
How To Rebrand: 19 Questions To Ask Before You Start »