How a NYC Photographer Elevated his Brand

Erick “Hercules” Urgiles is a NY-based photographer who has worked with such diverse clients as music legend Johnny Mathis to Mercedes Benz to songwriter Jason Mraz.
Breaking up his work assignments, Erick has had a fascination with gravity, more factually, defying gravity as part of a series of photos entitled “Levitation.”

I was lucky to run across his series and found the wide variety of slices of life, locations and personalities involved to almost capture a common thread when people are caught “mid-flight.”

Since many are familiar with my book, Defying Gravity and Rising Above the Noise, it was only natural this focus would resonate with me and my readers. (It’s also quite timely given his subject matter is the human form which was very much the star of the Defiance Fuel brand introduction and the killer video that elevated that brand.)

Taking a Tip from Miles Davis

The late great jazz legend Miles Davis was known for listening to what was not there, for the the space between the notes, that silence that gave the notes room to breathe and gave us such classic as Kind of Blue. When I first saw these images, it reminded me of that principle: capturing the person between their usual poses in life, that bit of “silence.”

Turning the Focus Around on the Man Behind the Lens

When I asked Erick about this series, he had this to say:

“As for why Elevation and Defying Gravity became the focus of my series, there were many reasons. What inspired me the most was the transient feeling of ‘supernatural’ that one can capture in a ‘elevated portrait.’

“I also realized that if my subject is captured midair, the viewer is pulled into an image that holds a moment in motion that has not yet reached its conclusion — hence, defying gravity, even if only for a momentary pause. To me, that definitely tells a captivating story of unpredictability since we don’t yet know what will follow. Will they land? Will they keep ascending? That’s what makes ‘Levitation’ such an intriguing concept that keeps the viewer engaged and watching with curiosity.” 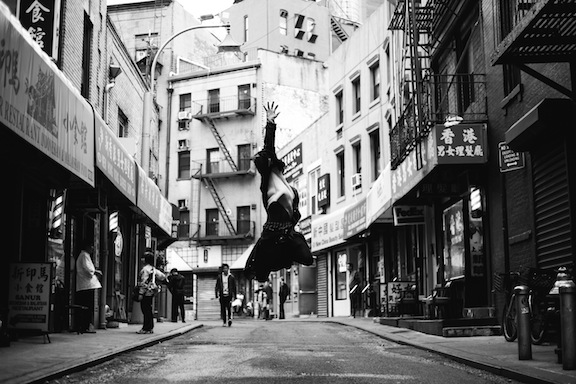 How will your brand elevate today and rise above the noise?

More Proof That Branding and Basketball Go Together
If You Have a Brand, You Need This Proven Skill
How to Find Your Brand's Untold Story: A Case Study
New York City & The Piled High Club