Are You Ready to Build Authority on the Clubhouse App?

By now, you’ve likely heard about the Clubhouse app, that invite-only, live audio, real-time, non-recorded, come-as-you-are platform that amassing a lot of attention.

As mentioned on AppAnnie, they shared this amazing statistic and data:

Plus, AppAnnie shared these stats:

As of February 1, it had over 3.5 million global downloads and 8.1 million by Feb 16, 2021, and has quickly garnered attention in the UK, Germany, Japan, Brazil and Turkey. Appearances from well-known figures in February, such as Elon Musk and Mark Zuckerberg, have helped the app to now exceed 2.6 million downloads in the US alone.

But how do you make traction as an early adopter?

How do you gain eyes, ears, followers, and fans while offering value?

The Clubhouse App is a Social Channel, Not a Lottery Ticket

It’s what we each bring to any platform.

So when the buzz was coming around on Clubhouse, especially with the “invite-only” angle, getting an invite made each of us feel like VIPs.

Then we discovered it had “clubs” one can create, once one has moderated some rooms and shown some street cred and conviction.

So I jumped into one room and my buddy Grant Cardone joined us. The room exploded with hundreds of people.

Well, all of a sudden, none of us were separated by six degrees, now we could found in the same room on any given day.

All because of this invitation-only Clubhouse app. Game changer.

So What Did I Do? 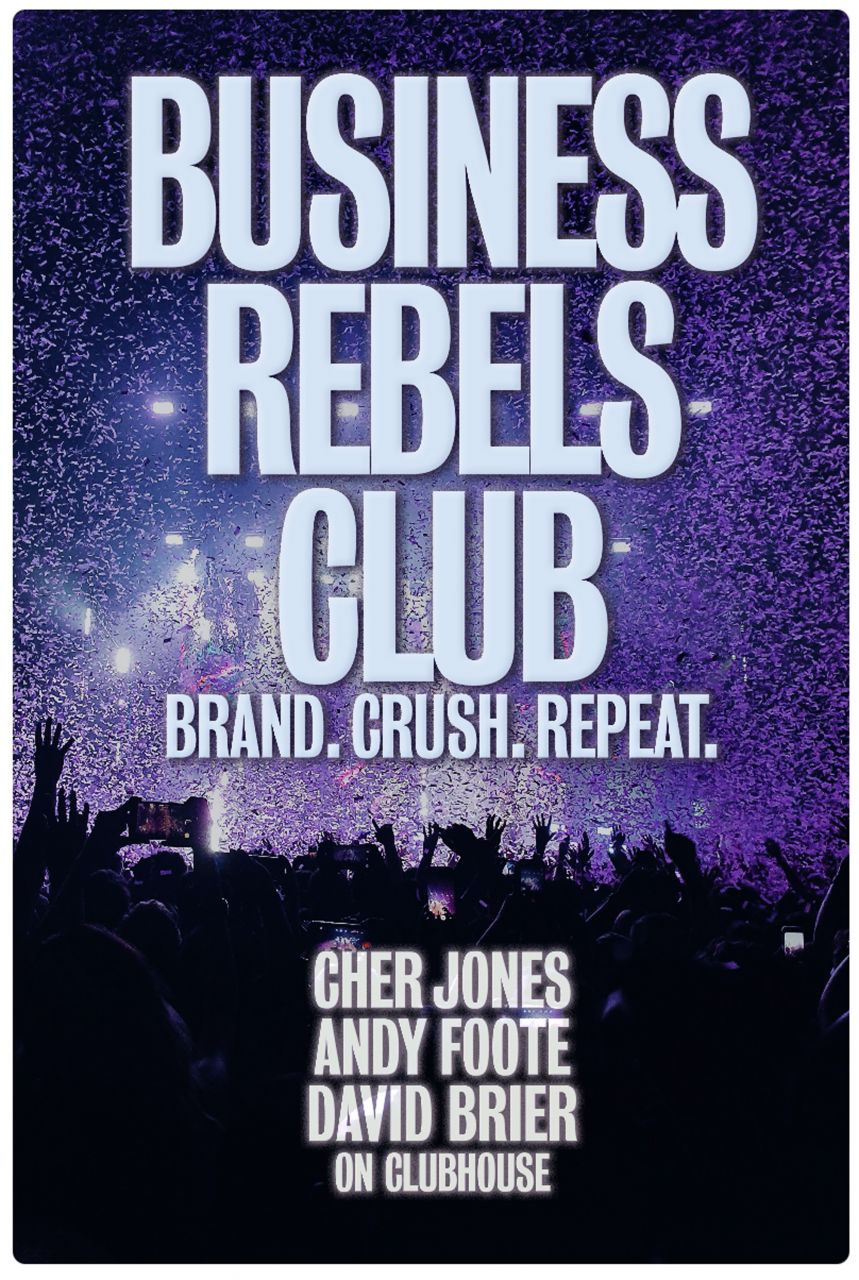 I looked for like-minded entrepreneurs who had hustle and muscle and were ready to rustle, to create a room. In other words, differentiate.

So I reached out to Andy Foote who is smart, hungry, and driven. Our chemistry was good.

Then I asked Andy if he knew Cher Jones, someone I knew and admired plus she has a great vibe and energy. He did and agreed.

The three of us spoke and we found we shared similar work ethics and the chemistry felt good.

So we brainstormed to name our “room” and what it stood for. The answer? Business Rebels Club. Nobody had it.

Now, what we stood for that was short and sweet? Brand. Crush. Repeat.

That had enough bandwidth to cover any topic but focused enough to be meaningful to those we wanted to serve: giving rebels, innovators, disruptors, leaders, and other rule-breakers a club they could call home, slaying dragons, crushing myths, and liberating what’s next.

Who is our Club designed for?

It’s built for CEOs, brands, leaders, and entrepreneurs who refuse to blend in, we slay dragons 2X every week

NOT YET A MEMBER? Join here: https://www.joinclubhouse.com/club/business-rebels-club

If Apple or Nike Were Doing a Room, What Would They Do?

That was the question I had to ask myself. It’s the only question that mattered.

So I started developing campaigns for the room, treating it as an actual brand.

The first promo was a carousel followed by a promo. These got well over 10,000 views on LinkedIn.

Then I started playing with our chemistry as inspiration since we were serious about our craft, but not so serious that there was no room to play, experiment, and prank one another for simple amusement since seriousness is deliriousness.

I started to treat the three of us like “hosts on a TV show” to add to the mojo of the collaboration. Here are two of those campaigns:

On top of that, we each admire and respect what we each do and bring to the party.

So much that Cher, who has a weekly LinkedIn Live, has a segment called “Scrollstopper” where she features anything she finds in the newsfeed that grabs you by the lapels, makes you want to stop scrolling, and engage.

One of the most recent promos was inspired by President’s Day and I decided to put Cher, Andy, and me on Mount Rushmore.

People loved it and it drew a lot of attention. Here is what Cher had to say:

“Oh, that smell? That’s the smell of success.”

For those times when you just can’t put your finger on that “perfect scent” that separates the ordinary from the extraordinary, that X factor that blends in versus the perfect thing that stands out.

That is what is the Business Rebels Club: 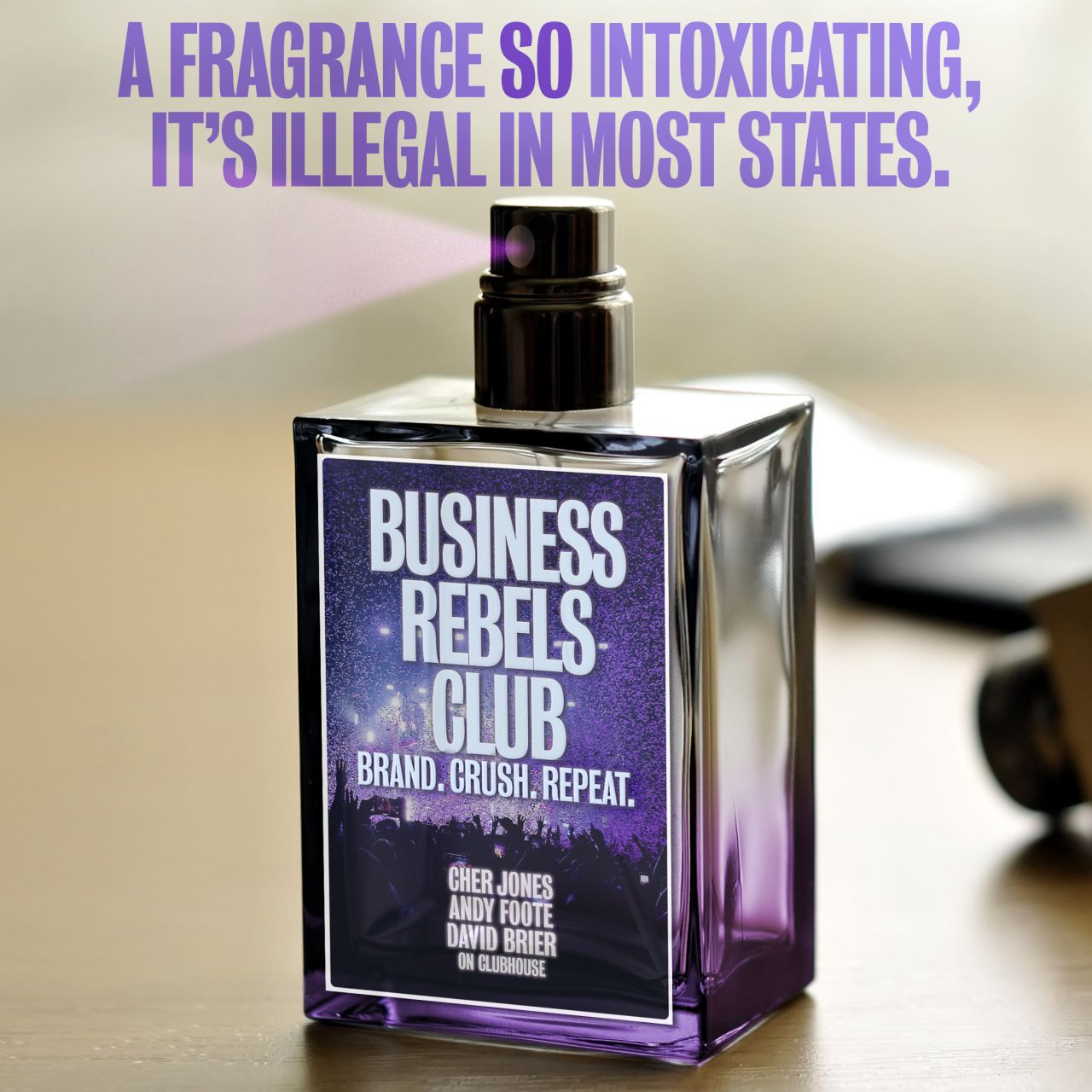 Never overlook the power of language to generate excitement as I show you here, with lines like: 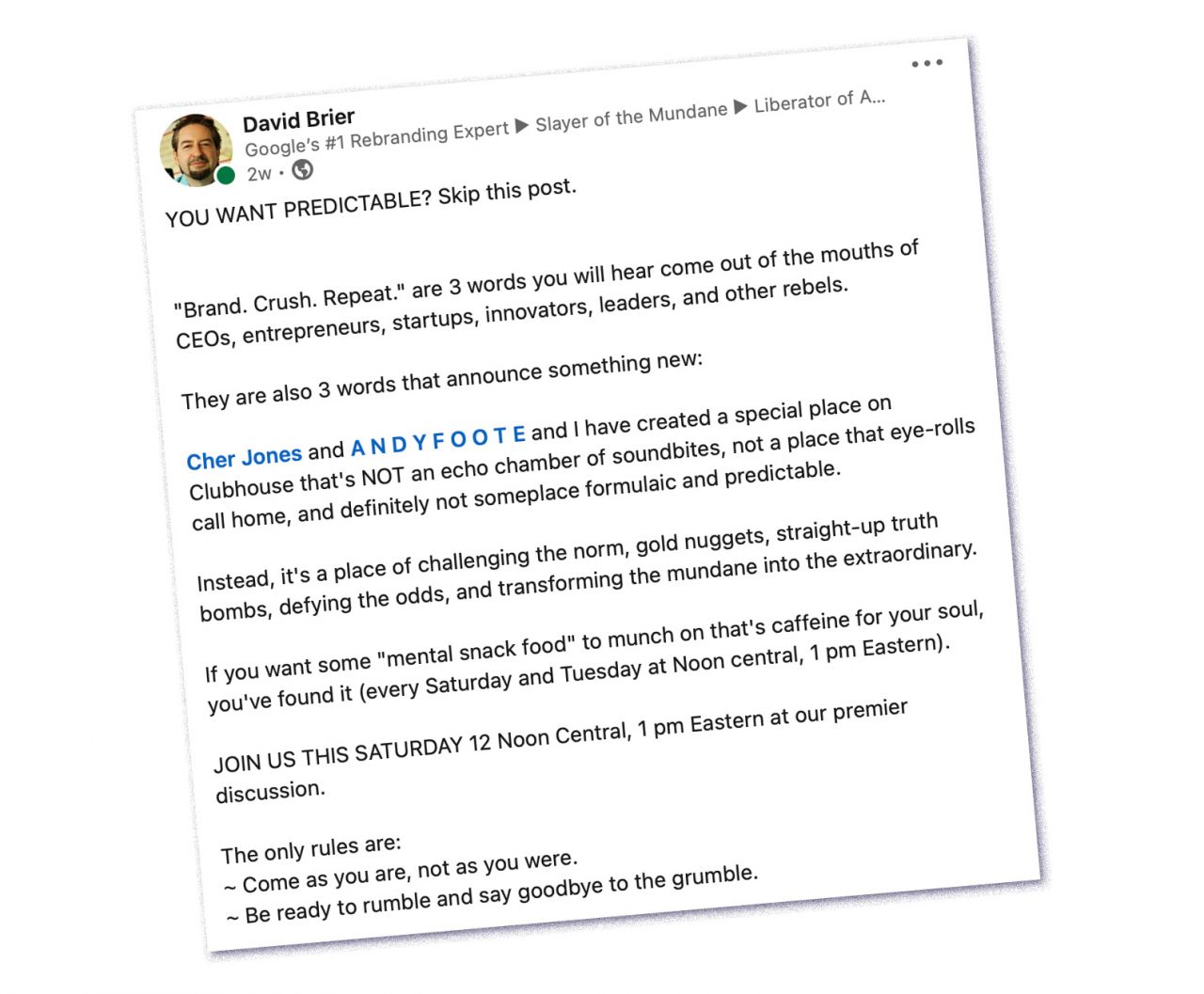 See you in the Clubhouse!

What the Brad Pitt Commercial Failed to Mention
13 Brand Killers and Why Startups Must Succeed
Mission Impossible: How (and why) some brands go rogue
5 Ways to Create a Brand Anybody Will Give a Sh*t About