Branding mistakes are awful. Some are worse than others and hard to live with.

The famous guy who said “No” to signing on The Beatles since “guitar music was on its way out,” well, that was a bad one. (Thankfully, The Beatles knew to say “No” to such feedback.)

Or the Western Union internal memo in 1876 that stated, “This ‘telephone’ has too many shortcomings to be seriously considered as a means of communication. The device is inherently of no value to us.” That person would have a cow looking at today’s mobile world.

Or as Steve Jobs reported on attempts to get Atari and HP interested in his and Steve Wozniak’s personal computer, “So we went to Atari and said, ‘Hey, we’ve got this amazing thing, even built with some of your parts, and what do you think about funding us? Or we’ll give it to you. We just want to do it. Pay our salary, we’ll come work for you.’ And they said, ‘No.’ So then we went to Hewlett-Packard, and they said, ‘Hey, we don’t need you. You haven’t got through college yet.’ ”

The Long and Winding Road

There is one word that, when used with insight and persistence, can move mountains and change the course of progress. This word has been abused and used at the wrong time stopping progress dead in its tracks. Other times, it is the powerful mantra of leaders who know when to elicit its power.

Knowing When To “No”

Spencer Silver, on his work that led to the unique adhesives for 3M “Post-It” Notepads stated, “If I had thought about it, I wouldn’t have done the experiment. The literature was full of examples that said you can’t do this.”

Thankfully for Spencer, he had a blind eye to “what couldn’t be done.”

Yet this is a skill one can manage and harness knowingly, not by mere accident. CEOs who crush it time and time again know this, James Dyson (of Dyson vacuum cleaner fame) and Richard Branson being just two examples.

All You Need Is Love

Love of evolution, progress and innovation.

To start, some things should be ironclad points you always say “no” to. On my personal shortlist, these include:

With those in mind, I designed a poster (shown below) which will be given to attendees of next week’s seminars in Louisiana as a reminder of the kind of mindset that it takes to deliver above and beyond expectation, to shatter previous records and to boldly innovate. Scroll down for the live shot from the pressroom of the actual poster! 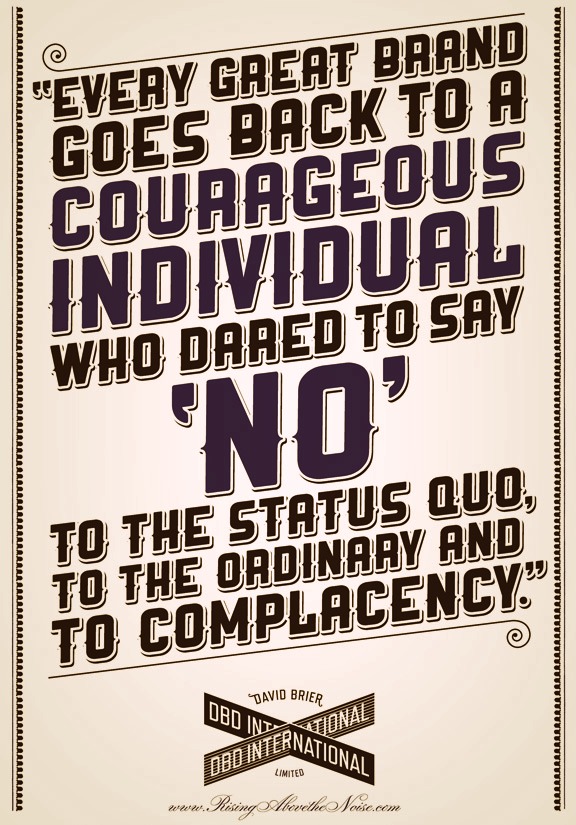 We just received this photo from Rise and Shine Letterpress of the actual limited-edition letterpress poster which rocks. Ryan and his team paid great attention to detail and made some excellent suggestions, so my thanks go to him and his team. Here’s a shot of the finished poster (almost taken while the ink was still wet):

With a Little Help From My Friends

If it were not for my colleagues and friends in Louisiana, this opportunity might never have come about.

This limited-edition poster will be given to the attendees of the upcoming seminars, and I may end up having a few extras. As soon as I have photos of the actual posters, I will post them here (which you can see above!).